I’ve never liked working a 9-5. When I graduated college I started a small publishing company of my own that did okay. I wasn’t rich but I also wasn’t working for anyone else.

The freedom that having that company allowed me to have left a lasting impression on me.

When I got another 9-5 job I forgot how much energy it sucks out of you. It’s not that I ever worked for bad people. I worked for great people and we did great things, but it sucks knowing that you just can’t go out to the store or do something random whenever you want.

When I help people with their blogs and I ask them what their goals are, they are always hesitant to say that one of their main goals is to make money but that’s what it should be.

Money buys you freedom and with that freedom, you can choose the lifestyle you want.

Who wouldn’t want that?

How My Wife and Brother Became Work From Home People

It must be said that out of my family I’m the adventurous one when it comes to running off on my own and starting businesses. I used to just do it for fun. Granted, the businesses I’m talking about might not be the ones you are thinking about.

I didn’t start sandwich shops but I would start online projects. If the project made any type of money then I considered it a business and that’s an important distinction. While what I was doing seemed small to a lot of people, I was still building businesses.

Some succeeded and some failed.

When I got back into the world of blogging from a long hiatus it was hard telling people what I did because while many people understand what blogging is, they don’t understand how you can make money from it.

The same could be said of my wife and brother. My wife was a veteran of the corporate world and at some point, she cracked and said she never wanted to go back.

I understood so I let her get any job she wanted and she became a nanny. While a nanny can make okay money, you aren’t going to get raises or promotions so you’re kind of stuck where you’re at for as long as you are in that position. For the short term that isn’t a problem, but when you have life goals that require a bit more money, this can slow you down.

My brother had recently graduated with a Masters Degree in Sports Administration. He spent 6 months as an assistant coach for a college soccer team and found out that wasn’t the life he wanted. We had a talk and he had no idea what he wanted to do.

When my wife and I moved to Colorado, she didn’t get another nanny position because I told her she could help me with my work. I also moved my brother in with us for a short period of time so he could see that things that I did and if he was interested he could jump on board.

Suddenly I had 2 employees and yet no money.

What was I going to do?

Because they both had an interest in fitness (they went to the gym every morning) I decided that we could start a health & fitness blog. They were a bit skeptical because to them blogs were for people who take pictures of cats.

On the outside, there is no obvious way to make money with blogs besides ads so I understood their skepticism but I told them to just give it a shot and that’s when Thrive/Strive was born.

The First Mistake: Writing for the Wrong People

Almost every blogger that I teach starts off on the wrong foot with regards to their content. Instead of writing for their audience, they write for themselves and we made the same mistake on Thrive/Strive.

Instead of taking the time to understand what our audience wanted, we wrote about the things that we thought were brilliant ideas.

This is how traffic looked over the first 3 months:

In 90 days we only received 1,673 pageviews and that’s being generous considering the big spike we had at the end of August.

I had promised them that they would be able to be a part of something and the only thing they were a part of was a blog that wasn’t moving the needle.

However, that small spike at the end of August gave me hope. It showed me that we might be onto something.

Up until the end of August, we had been writing posts that excite us like I Ain’t No Instagram Model and Why My Body Is Ashamed of Me. Awesome posts but they weren’t clicking.

Because my wife is big on nutrition she wanted to write a post on carbs to help people understand them better. I’ll tell you right now, she had trouble finishing the post because it was so boring for her to write.

She finished it though and we started to pin it on Pinterest.

That spike at the end of August is all from this boring post.

That’s when I realized our jobs weren’t to be entertainers, but problem solvers.

People mostly go to blogs because the blog promises to help solve a problem. If we focused on the problems that our audience had then we could write blog posts that catered to them and so that’s what we started to do.

Here’s what happened in September 2016:

In one month, we received 10x the amount of traffic that we received the prior 3 months combined!

Do you know what happens when you go from 1600 pageviews to 18,000 pageviews in one month? You get excited and it pushes you to figure how to replicate the success and that’s what we tried.

In October, we couldn’t replicate the giant spike of traffic but at least we were doing okay traffic with the addition of a huge spike:

The results have been phenomenal over the past 11 months:

It’s great for me to give you generic advice about writing for your audience. That’s what everybody tells you but how do you go about doing that?

It’s a lot easier than you might expect. What we used is something called the Skyscraper Technique.

The idea behind this technique is that you find content that is already doing well in your niche and then you go and write a better version of it. In the case of Thrive/Strive we found that yoga posts were doing really well on Pinterest so we started to write yoga posts and traffic began to grow.

Almost all of our ideas come from Pinterest because that is where a lot of our audience hangs out.

So going on Pinterest we were able to come up with a big list of content ideas and what we did from there was put our heads down and write.

From the content side of things, it was that simple.

Of course, that isn’t all that is needed, you need ways to promote the content to the right audience.

Most bloggers don’t understand the value of Pinterest and it’s understandable. From the outside, it seems like a place where people save their home decor images and recipes.

But it really is so much more. Instead of going to Google looking for solutions, over 200 million people a month turn to Pinterest for help.

Depending on your niche, you might have a large audience of people waiting on Pinterest to come across your content. Pinterest is the reason why we saw the first spike in August of that year and has been the main driver of traffic ever since.

While I’m not going to dive into how to build traffic with Pinterest in this post, you can check out how I was able to generate over 400,000 pageviews in 60 days with a brand new blog.

Getting traffic is good but if you aren’t making any money, what’s the point?

One of the beautiful things about blogging is that it gives you a number of different options to make money. Using ads on the blog was the obvious one so once we hit 100,000 pageviews a month, we applied to AdThrive and were shortly accepted after.

One of the great things about AdThrive is they generally work on your behalf to get you the best ad rates possible. Bloggers like to apply to Google’s AdSense right away and quickly find that they are only making a couple bucks a month with their traffic. AdThrive has consistently provided us with rates around $10 RPM (that means $10 for every 1,000 pageviews). 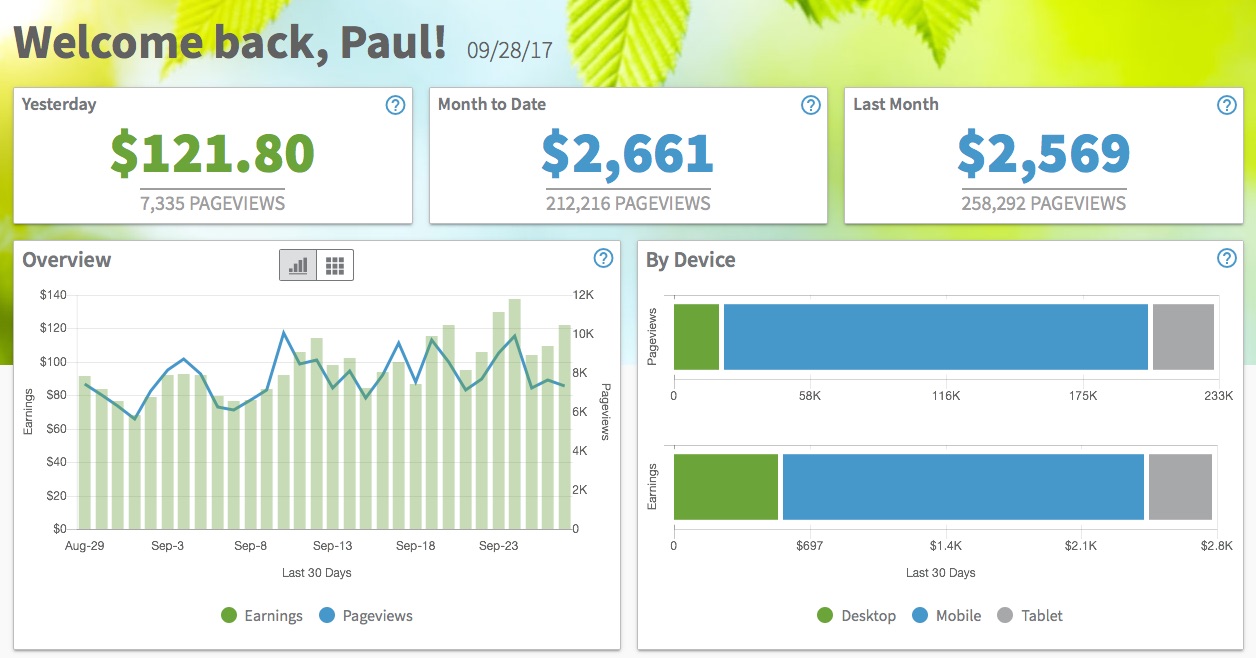 Due to the way companies spend their marketing budget, this can fluctuate month-to-month but overall it’s much higher than what we would get with Adsense alone.

Some people stop at ads but we knew we could do more so we also invested in affiliate marketing. Now in the health and fitness niche, making money with affiliate marketing is a bit harder since the products are all over the map but every penny ads up so if we see an opportunity to get in product links from the companies we love, we are sure to take advantage of it.

Finally, we understood that if we really want to make some decent money we needed to create products of our own and that’s exactly what we did.

A Book and Membership Site

I’ll be honest with you, it took us some time to figure out what we wanted to make but we finally settled on creating a membership site based around the ketogenic diet. We are all followers of the diet and we noticed that more and more people were showing interest in it so after a couple of weeks we created Keto Dash.

Because we had an established mailing list we started to make money with the site from Day 1 and we haven’t stopped since.

What happens when you’re able to build an audience and create a product based on their needs?

Because we own the product we don’t have to wait for a special payment day. Instead, we get a new deposit of money to our bank account every weekday. It’s a nice feeling knowing that you can take some time off and still have money coming in.

It started with us writing content that our audience wanted and not the content we thought they wanted.

Then it was all about promoting that content in the right places.

Finally, we made sure to invest in multiple revenue streams so we weren’t reliant on a single source.

Put those things together and you have a small business that is able to support 3 people working from wherever they want.

The blog itself is simply a gateway to bringing people in but it’s an important aspect of the business. My wife and brother never expected things to turn out like this but it did so all we can do now is continue to ride the wave.

And what a ride it’s been.

It’s an amazing feeling to be able to give my wife and brother the freedom to do what they want when they want (as long as they do their blog tasks) and it’s something that I hope others are able to achieve for themselves and their loved ones.

I’ve been able to duplicate my success with Thrive/Strive across a number of other blogs as well. Now I run over 10 blogs and have two membership sites. What I’ve found is that there is a pattern to all of this that I could replicate time and time again. These are the things I teach in Dare to Conquer.